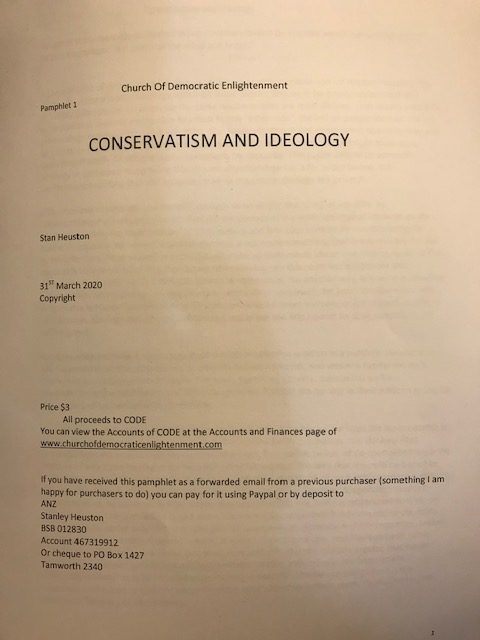 This pamphlet considers key aspects of conservative or right wing economic ideology against a summary of left or progressive ideology. It argues that both ideologies are credible theory supported by evidence and valid inference from it, and that each side, while not necessarily accepting the other as correct, cannot object to it as unreasonable.

The pamphlet further considers a substantial article of progressive ideology in Bernie Sanders’ book Where We Go From Here. It argues that while it reasonably appeals to the left there are sound reasons it could be rejected by conservatives as an acceptable and preferable political program.

The pamphlet argues in conclusion that while the sets of ideas comprising the two ideologies can be asserted as such, on balance the operational irreconcilability of the ideologies, and the ideologies themselves, dissolve in the necessity of each side accepting the other as reasonable, in favour of an overriding solely realistic approach of rationally pragmatic compromising discussion. Ideology is seen as having other purposes than sound government and societal benefit, the absence of those purposes despite profession of them suggesting the artificiality of ideology as opposed to its reality, ideology as what it purports to be an illusion.

There are no reviews yet.

Be the first to review “CONSERVATISM AND IDEOLOGY” Cancel reply